A Short History of the Goleta Union School District

The Goleta Union School District has its origins in the consolidation in 1925 of the first three small elementary schools in the Goleta Valley, Cathedral Oaks, La Patera, and Goleta, known earlier as Rafaela School.

Until 1957, the District operated one school, Goleta Union, on Hollister Avenue. The school is now the site of the Goleta Valley Community Center. From 1957 to 1969, the District built twelve new schools in response to the explosion in population as housing tracts rapidly replaced orchards in the valley.

This brief history is a work in progress. If you have corrections, additions, or photographs to contribute, please click here to e-mail the District Webmaster.

1869:
Rafaela School is established. It is named after Rafaela Ortega Hill, wife a land-grant don of the Goleta Valley. Students are nicknamed “The Clodhoppers.” Frank E. Kellogg is the teacher from 1887 to 1897.

1875:
Rafaela School is built near the southwest corner of the intersection of Patterson Avenue and Hollister Avenue.

Cathedral Oaks School is established and built at 4974 Cathedral Oaks Road. Rose Everett is the first teacher. The students are the “Punkin Rollers.”

1877:
La Patera School is established and is built west of Fairview Avenue and north of the Cinema Theater. The students are the “Webfoots.”

1881:
A new building for La Patera School is built west of Fairview near the site of the current Goleta Library. It is dubbed “The Hump-Floored School” because the weight of the upstairs teacher’s quarters causes the foundation to settle.

1911:
Goleta School is built to replace “Two-Story School,” which is deemed a firetrap.The new school is a one-story building with arched entrance and bell tower. The building is eventually moved in 1928 to the rear of the current Goleta Union site on Hollister Avenue. It serves as a kindergarten and First Grade building until it is demolished in 1957.

1925:
Goleta Union School. Voters overwhelmingly approve the consolidation of Goleta School, La Patera School, and Cathedral Oaks School. Enrollment is 190. Trustees approve the construction of a new school and to ask voters to approve an $80,000 bond issue for new construction.

1927:
Goleta Union School opens at 5679 Hollister Avenue. The school has eight classrooms, and an auditorium with theater stage. The cost is $65,000 for the building and $22,500 for the land. George Locey is the principal.

1946:
Dr. Ian Crow is named principal of Goleta Union School. Dr. Crow serves as principal and later as superintendent until his retirement in 1972. He oversees the construction of twelve new schools from 1957 to 1969 as the population of Goleta Valley explodes and the orchards are replaced by housing tracts.

1957:
Cathedral Oaks School opens on Turnpike Road. Edward Zuzalek is named principal. The school remains open until 1978 when trustees respond to declining enrollment. The building is eventually sold to Santa Barbara City College, is now known as the Wake Center, and used as an adult education center.

1959:
Isla Vista School opens on El Colegio Road. Joseph Albon is named principal. The school is demolished in 1998 and a new school is built on the same site in 1999.

1962:
Hollister School opens on Anita Lane, south of Hollister Avenue. Charles Metcalf is named principal. This is the first of a series of five schools built with seven rectangular concrete block buildings and eighteen classrooms.

1965:
El Camino School opens on San Simeon Drive, north of Hollister Avenue, west of Turnpike Road. Earle Carter is named principal. The school is closed in 1982 and reopens in 1999.

1966:
Ellwood School is annexed. Marie Alumbaugh is the principal.

1966:
Mountain View School opens on Queen Ann Lane, north of Cathedral Oaks Road and west of Patterson Avenue. Edward Zuzalek is the principal. This is the first of two hexagonal “pod” schools.

1969:
Brandon School opens as the District’s thirteenth school, on Brandon Drive, south of Cathedral Oaks Road and west of Glen Annie Road. The school is eventually closed in 1982 because of declining enrollment. It is reopened as a full school in 1996. District enrollment reaches 6,575 students. 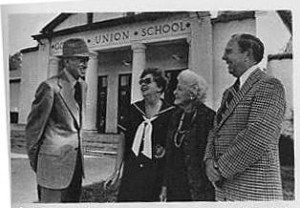 Goleta Union School is closed. District enrollment has fallen to 6,153 students. The school does not meet earthquake safety requirements. The building is sold to the County of Santa Barbara and becomes the Goleta Valley Community Center. Below: Hal Caywood (l) and Ian Crow (r) with Isabella Waugh and Mrs. Chester Rich in front of Goleta Union School.

1976:
Fairview and Cathedral Oaks Schools are closed. District enrollment has declined to 5,063 and falls to 4,583 in the fall.

District office site is named after Jack H. Kramer. Jack was born in 1930. He went to UCSB and he is shown here in the 1951 yearbook with his rifle buddies.  He is second from left. In 1959 he owned Jack Kramer’s “Flying A Service.” In 1962, he was the GUSD Building Inspector. In 1977, he became the GUSD Director of Facilities. Jack passed away in 1980 and was buried in the Goleta Cemetery. The mission of the Goleta Union School District is to maximize academic, intellectual, and personal growth in order for each student to prosper in, and positively influence, a diverse and dynamic world.

Send us your e-mail address to receive notification of new postings.. . .